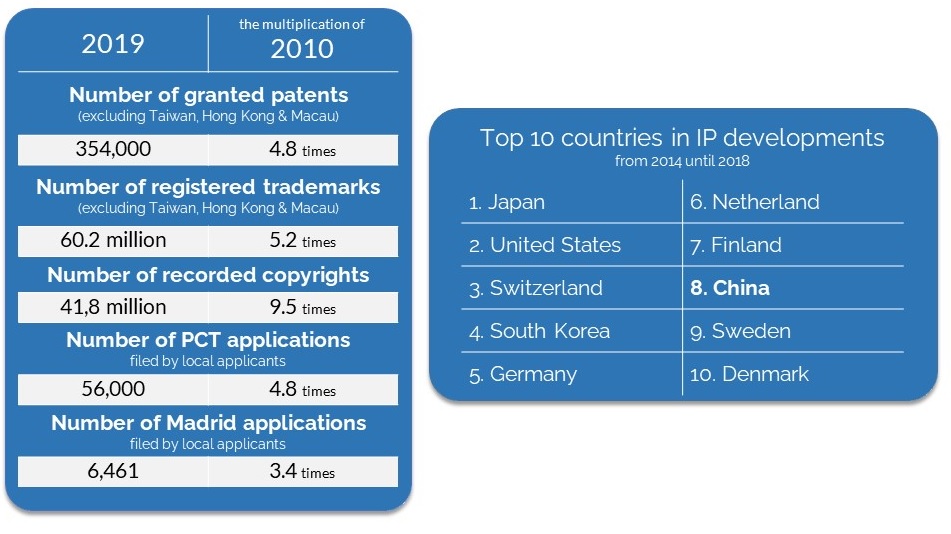 The report demonstrated that China has achieved all-round enhancement in the IP sector, which can be attributed to effective strategies and people's combined efforts, said Han Xiucheng, director of the IP development research center at CNIPA.

Among the four perspectives, innovation has developed rapidly since 2013 with the index reporting an average annual increase of 15 %. In 2019, the number of granted patents increased to 354,000 and the number of registered trademarks exceeded 6 million.

The country has also made remarkable progress in its IP environment with revised regulations and laws, improved services and enhanced awareness, said the report. The IP environment index rose to 297.4 last year

As for IP application and utilization, the index increased sharply to 234.8 in 2018 and remained flat last year. IP applications have boosted the country's economic growth, according to the report. Statistics show that the added value of China's patent-intensive industries reached 10.7 trillion yuan ($1.57 trillion) in 2018, accounting for 11.6 percent of that year's GDP.

According to the report, the greatest gap between provinces was in IP environment. More efforts should be made to strengthen IP services and raise public awareness in rural areas, Han said. Additionally, while a huge number of patents and trademarks have been utilized in rural areas, they did not bring considerable economic benefits as expected. "This is a common problem found in most provinces, which indicates both IP quality and business environment need to be enhanced," Han said.

From the international perspective, the report selected 40 sample countries and compared their overall IP development from 2014 to 2018. Japan topped the list in 2018, followed by the United States and Switzerland. China make it to the top 8 in 2018 from 20th in 2014.

China's international influence in the IP sector has expanded greatly in recent years, said the report. According to the World Intellectual Property Organization, China became the top source of international patent applications filed via the Patent Cooperation Treaty in 2019, surpassing the United States which had ranked 1st for more than 40 years.